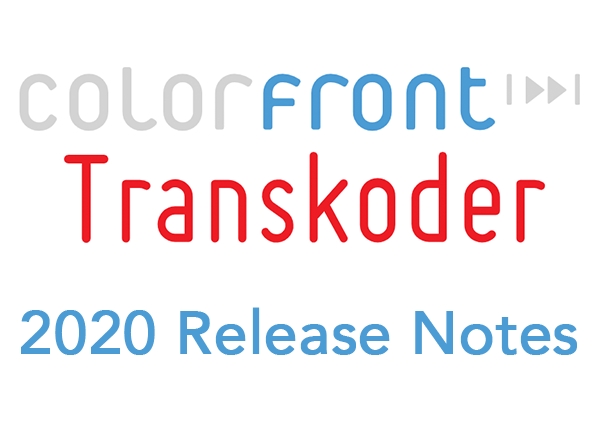 Discover some of the major new features in the Colorfront's Transkoder 2020 Initial Release.

There is a new Submit to Queue button in the Finalise window to send IMF and DCP packages for background rendering. Depending on availability, package generation jobs will be picked up either by the submitting computer, or other render-only machines. With this new feature, operators' work will not be blocked with package generation, allowing for more optimized IMF and DCP workflows.

IMF validation performed through the Colorfront developed Transkoder validation library is now compliant with the latest 2020 IMF standards. The newly published 2020 IMF specifications contain, among others, the support of IAB only IMF deliveries.

For immersive audio (IAB) deliveries, Transkoder supports CPLs without channel-based audio, which is allowed in the 2020 revisions of IMF App 2E/Core Constraints. For this, new IAB-only Netflix IMF presets have been introduced in the Finalise window. These new presets generate CPLs in accordance with the latest 2020 specifications.

New IAB only IMF Netflix presets have also been introduced in the Finalise window to support delivering IMF packages to Netflix with immersive audio. Please make sure there is an IAB source on the audio track so that the package generation would not fail. 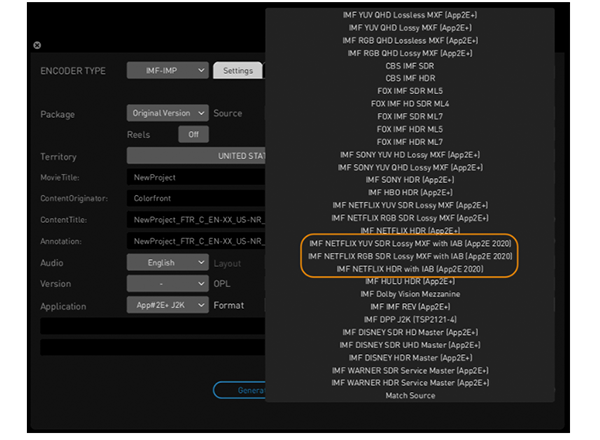 There is also a new option in the Dolby Atmos Mix popup menu in the Audio Mixdown window: now you can down-convert the IAB audio to 5.1.4 channels as well. The algorithms used for playing back and rendering object-based Atmos source files have been certified by Dolby Laboratories.

Due to the integrated latest Dolby Vision CMU SIDK, when working in Dolby Vision v4 projects and creating new metadata (green timeline), the new, certified L8 to L2 metadata mapping will be applied. This improved remapping generates Dolby Vision metadata for tools and devices only supporting the legacy content mapping algorithm, producing a much greater fidelity to the v4 content mapping result.

Adding subtitles to PQ or HLG encoded HDR footage should be done with proper remapping of the sRGB subtitle colour attributes to achieve proper brightness levels. To drive this process, the Subtitle node has been enhanced with a ColorConv drop-down list to apply colour conversion on the subtitle text and also a Brightness slider for tweaking the peak luminance. The slider is only enabled when HDR10 or HLG is selected from the ColorConv list.

To drive the brightness of individual subtitle spots in case of the HDR workflows, the <Luminance Gain> attribute can be used for IMSC subtitles. Transkoder now uses this metadata to properly render the HDR timed text such that each spot is mapped to the appropriate peak luminance. Make sure to leave the Brightness slider at its default 400-nit value to get luminance values based on the relevant specifications.

Transkoder now supports the display of multiple subtitle tracks. Any number of subtitle nodes can be added to the pipeline allowing for subtitles in different languages for the same shot. The position and offset sliders are for adjusting the position of the text to avoid overlapping subtitles, but other text parameters can be adjusted in the HUD as well.

The Colorfront Engine (CFE) node has been improved both in appearance and functionality. The goal of the improvement was to create a simplistic, intuitive and easy-to-use control panel, which was ensured by the introduction of input and output presets. Simple CFE Pipeline. A new pipeline option has been added to the project processing templates, which creates a simple, easy-to-handle Colorfront Engine pipeline utilizing the CFE node. As an advantage over the regular, more complex Colorfront Engine pipeline, this setup requires less GPU resources.

Colorfront’s CFE metadata file is a fully adjustable, human-readable format that, defined by the Colorfront Engine (CFE) node, contains metadata such as input and grading colour space, camera colour and CDL information, look metadata as well as output parameters. The CFE file is interchangeable across various platforms, not only between Colorfront products, but also with third-party applications, such as Nuke or Pomfort LiveGrade, allowing for bidirectional communication between software vendors and industry partners.

If you would like to find out more about working with Transkoder give us a call or email This email address is being protected from spambots. You need JavaScript enabled to view it., we would be happy to arrange a one to one demonstration for you.