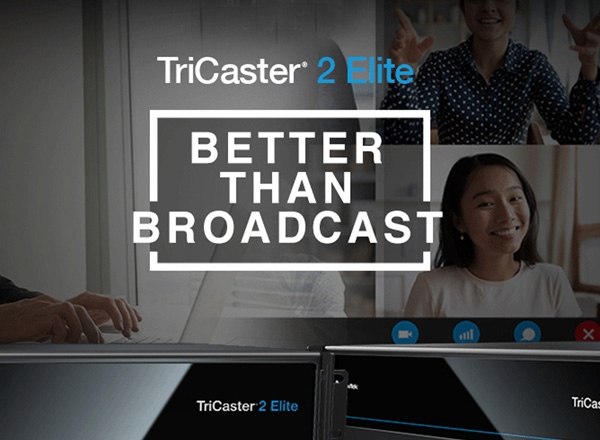 The world’s most complete video production platform connects virtually any video source or remote caller; blends superior production tools and IP workflow management like no other

SAN ANTONIO, TX –– July 7, 2020 NewTek, the leader in IP-based video technology and part of the Vizrt Group, today announced TriCaster® 2 Elite, the most powerful and complete live video production system on the planet. The new flagship TriCaster 2 Elite provides video producers, visual storytellers and system integrators with better than broadcast functionality and uncompromised flexibility. In addition to cutting edge video production capabilities, TriCaster 2 Elite enables studios, broadcasters, large scale campuses and enterprise facilities to harness nearly every major video calling application in use today, delivering them a myriad of creative options. To further amplify the flexibility and scalability, both future-proofed video over IP and more traditional SDI are supported by the platform.

“Serving the needs well of those who make visual storytelling a key part of their business is made possible by combining IP networking, software-defined solutions and a focus on the customer experience. TriCaster 2 Elite currently has no equal in terms of capability and value and I believe that it is the best product we have ever made, said Dr. Andrew Cross, president of R and D for the Vizrt Group. “More than ever, businesses, governments, schools, houses of worship and other organisations tell us they are adopting broadcast techniques to communicate their message to their world more effectively as they seek to stay relevant in a rapidly changing environment.”

TriCaster 2 Elite sets a new standard for production in today’s multi-source world, with new core functionality unavailable in any other system. Nearly every web conferencing tool including; SkypeTM, MS TeamsTM, Zoom MeetingsTM, GoToMeetingTM is supported, as well as all IP video sources including NDI®, SRT, RTMP, RTP, HTTP, SRC, and smartphones. These, along with almost unlimited traditional SDI sources, can be accessed and used simultaneously, meaning show producers will be able to connect with in-studio guests and remote video callers without compromise or worrying about connectivity.

At the heart of TriCaster 2 Elite is a high speed 60x45 video crosspoint that includes 32 external inputs that automatically determine video format and resolutions up to 4Kp60. Unlike conventional routing switchers, where creative limitations are the norm, each input includes proc amp tools, independent keying and cropping for crisper video, as well as triggers for automation. No tradeoffs are required with 8 configurable mix outputs in HD or 2 in 4Kp60, direct NDI outs of media players, multiple streaming encoders, continuous NDI conversion of all 8 SDI inputs, and 8 independently selectable recorders for immediate replay. The flexibility of the platform allows content creators to produce simultaneous mixes, deliver multiple 4K streams to different places at once, feed video walls and accommodate separate branding and language packages, record program and line cuts, and much more.

When it comes to integration, the TriCaster control API and automation tools deliver creative video production and IP workflow solutions that are highly interoperable with existing equipment, such as control room systems, video walls, multiviewers, media platforms and the like. Combining these capabilities into one simple and fully integrated platform makes TriCaster 2 Elite better than broadcast for everyone with a story to tell.

TriCaster 2 Elite, the most complete video processing system in the world, affords 8 mix/effects (M/Es) with 4 layers each to ensure unlimited creativity, enhanced by strong integration with Adobe® Creative Cloud® tools. Reducing risk and effort, visual storytelling automation tools with simplified teleprompter-based scripting with Microsoft Word document files are included. Virtual and augmented reality scenes can be rendered in real time from Adobe® Photoshop® files while non- standard framerate and aspect ratios such as 9:16 make it easy to deliver engaging content to a plethora of modern media screens. Other features include frame sync on every input, animated GIF support in buffers, social media publishing, audio mixing and routing, including support for DANTETM and AES-67, among others.

NewTek is the leader in IP video technology that gives every storyteller a voice through video. Working exclusively with selected Channel Partners around the world to bring its innovative solutions to market, NewTek empowers customers to grow their audiences, brands and businesses faster than ever before. NewTek products are natively IP-centric via NDI

TriCaster 2 Elite is now available - for more information or to arrange an online demo call us today on 01582 466100 or email This email address is being protected from spambots. You need JavaScript enabled to view it.